by Manansh Sharma
in Business
0 0
0

The iPad Pro also supports USB-C and Face ID to attach to monitors up to 5K to turn into a workstation. It can even charge your iPhone, basically turning it into your power bank.

The iPad Pro’s Pencil magnetically joins to the side of the device and automatically charges — a slight touch Apple hopes will resonate with inventive users.

Apple also showed off a totally redesigned MacBook Air, starting at $1199. That’s up to $200 from the former model, mainly due to its most advanced Retina display.

“When Steve [Jobs] drew that MacBook Air out of that case, it was clear things would never be the same,” Cook told attendees. “The MacBook Air’s skinny design not only influenced the Mac line… it transformed the industry.”

Cook ensures those developments will continue. Apple said the MacBook Air is 25% lighter than its former reiteration, now weighing in at 2.75 pounds. The plain aluminium bezel has been separated for a smoother border. For the first time, its base is made out of 100% recycled aluminium to help decrease the computer’s carbon footprint by 50%, according to Apple. 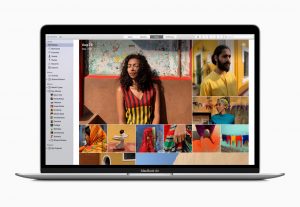 Beyond its effort to make it more eco-friendly, the 13.3-inch notebook features a more responsive keyboard. But noticeably missing from the device is the TouchBar feature launched two years ago that brought a bunch of controls right to the keyboard, and which many users hated.

Apple also promoted its new addition of Touch ID for increased security. Still, that addition is an exceptional choice: Apple is walking away from the feature on its flagship iPhones in favour of Face ID.

The company also revealed its first update to the Mac Mini in four years.

However, it looks strikingly similar to the last model; the improved device arrives with a quad-core Intel processor with an option to update to a six-core version. It shows off four USB-C Thunderbolt 3 ports and HDMI, and tech-giant states it is five times faster. It now comes in space grey.

US and China together vow climate change commitment

NASA picks SpaceX for the supply of moon lander