The shocking truth behind her unexpected demise.

Have you ever wondered what would happen if you google about yourself and find the details of your future on it? Well! It seems creepy and baffling at the same time. The same is the unexplainable story of Annora Petrova and her startling death.

Annora became a popular name in the ice skating world and actually got her spotlight when her soul left this world. It is still hard to believe and conceive the notion of her death forecast on the Wikipedia page.

This story is still imprecise, and it is hard to believe the information available is true. After so many rumors and speculations, we decided to look at all the possibilities and resolve the mystery of her death.

Let’s begin with a few facts about her life.

Who is Annora Petrova? 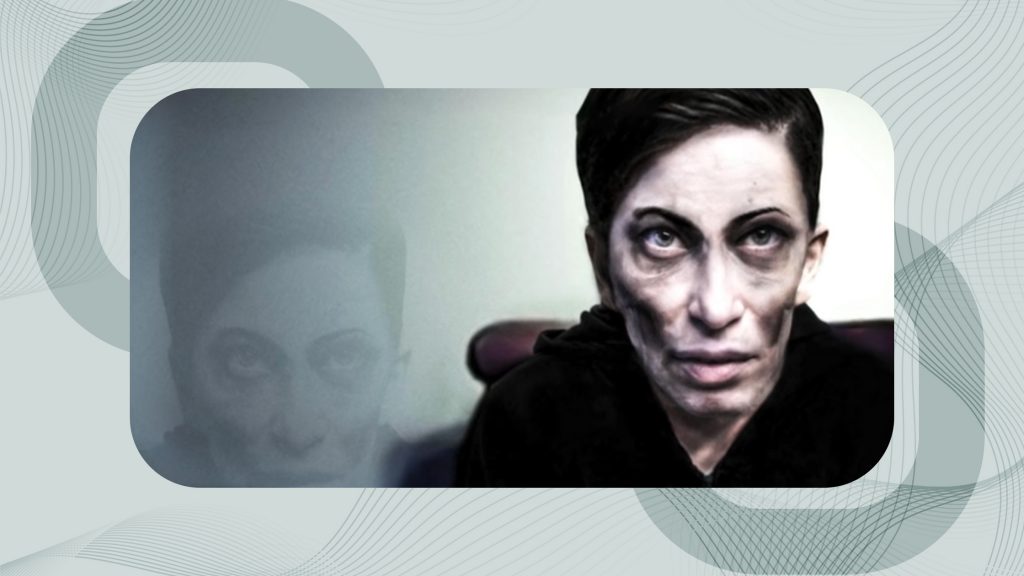 Annora was said to be the daughter of Nancy Petrova and Mikhail Petrova. She began skating at the early age of 13 and won the title of Crystal Classic Champion.

When searching on google pages about Annora Petrova, no information was available justifying the fact about having information on Wikipedia.

The championship of Crystal Classic Champion is still not found; instead, a competition titled Crystal Skate of Romania is held for figure skaters every year.

However, a figure skater from Russia named Maria Igorevna Petrova has the same surname as Petrova and is available on Wikipedia. The connectivity between these two sportswomen is still unavailable, but some people also link them with each other.

It seems like Annora can be a fictional character and is ruling the internet with this unbelievable story on Wikipedia Page. It has horror, mystery, and thrill at the same time.

Moving forward, let’s look at the tragic story of Annie, her struggle to be a champion of Skating, and her tragic death.

Her Achievements as a Skater

Annora won the first championship of Crystal Classic Championship. Later, she was trained by the popular skater Sergei Polukev.

She also won the Sectional Championship of her school. Furthermore, she began to prepare herself for the Olympics under the leadership of Sergei.

Her life was going well until she randomly searched her name on google. She found the Wikipedia page of her name predicting her win in the upcoming championships.

Before winning the Crystal Classic Championship, she googled and found her name as a winner of the competition. Initially, she thought that her father made the page to encourage her to win.

Later, she discovered that it was not her father but someone else. However, she won the competition the next day.

At first, Annora thought that her page was edited by her best friend Bree, who was also an outstanding Skater and her tough competitor. She even tried to confront her and drafted a letter that police kept as a piece of evidence and never shared with Bree.

Another controversy that Petrova faced was harming Bree at the time of tryouts of the Olympics. However, it was not proved that Annie was completely responsible for the accident.

While competing for qualifiers, one of the blades from Bree’s skates flew off and hit Petrova on the forehead. It was alleged that Annora was the one who compromised Bree’s security and tampered with her Skates; however, she denied the blame.

Being her only rival, it was concluded that she was responsible for the incident and got banned from the competition.

When she received the success that was pre-mentioned on her Wikipedia page, Petrova’s life turned completely. It was completely unknown to her who was the face behind crafting the events of her life on the internet.

Her life turned drastically when she decided to edit her Wikipedia page right before her sectionals for the Olympics. She edited her page stating her win.

When she tried to update the page, it displayed a derogatory statement that changed her life completely. It sounded like Annora Petrova is a selfish little bi***, and she is going to get what she deserves.”

Even after the scandal with Bree’s skates and getting banned from future competitions, Annora stayed curious about the Wikipedia page. She decided to uncover the mystery face behind the updates.

She directly contacted the administrators of Wikipedia regarding the tragedies and mental harassment she faced on the platform. When she contacted the Department of Wikipedia, the response was baffling for her. 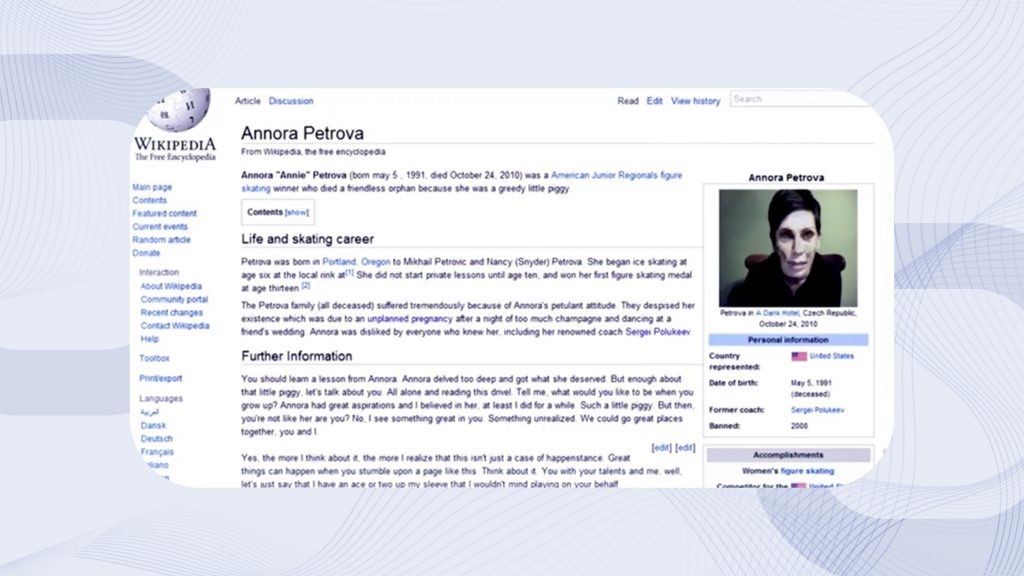 Petrova was told about not having any record regarding the page she was talking about. No information related to the name Annora Petrova was updated on the internet.

The reply from the administrators was so disturbing that she again opened the Wikipedia page to check what would happen next. The next moment, she found the updates stating that she was an Orphan and her parents had passed away in a horrible accident.

After reading this, she continuously tried to contact her parents. She only heard a burst of laughter from the other side when she called. After some time, she learned about her parent’s death in an accident.

Later, when she checked the call records of her parents, she did not find any record mentioning her call.

After her parent’s demise, Annora was in a state of depression. She settled her parent’s will and moved to Switzerland, where she got treatment at a Swiss Hospital.

She stayed in the hospital for several years and recovered from all her past traumas. Annora further began to rebuild her life in Europe and decided to practice Skating again.

She reignited her passion for Skating and decided to work hard to succeed in the field of Skating. She also received an interview call for Ice Skating from Prague.

On October 23, 2010, Annora was sitting alone in her hotel room in Prague. She was nervous about her Interview the following day. Regardless of swirling numerous thoughts in her mind, she made a mistake by watching the update on her Wikipedia page again.

Annora decided to check her page One last time before her Interview. When she checked the update, she felt cold feet and went into a stage of complete shock.

It stated, “Annora “Annie” Petrova (born on May 5, 1991, and died on October 24, 2010), was an American Junior Regionals Figure Skating Winner and died as a friendless orphan as she was a greedy little piggy.”

The moment she read this, she went into complete shock. Th every moment, she decided to write a letter to her Best friend and ex-competitor Bree, explaining what went wrong and how things were turning out for her.

The next day, she was found dead in a hotel room in Prague beside her computer. It was believed that she was typing when she died.

Letter Wrote by Annora To Her Best Friend ‘Bree’

When Petrova came to know about her death, she wrote the whole incident step-wise to her best friend, Bree. However, Bree never received the letter as the police decided not to share it with her.

She saved everything in the draft. Her last words she wrote were, “There’s only a few minutes to midnight now. All I can do is refresh the page.” She further stated that she was exhausted, but she couldn’t stop.” She also wrote that “she was scared to leave the computer as she did not comprehend what would happen next.”

Annora Petrova wrote a long letter discussing every event since she was in 8th grade and everything from her success to her downfall. And she died while writing her letter to Bree.

Her Last Words Typed In The Document

Other than her letter to Bree, a paragraph was also typed in the document. It sounded, “So tell me, what do you prefer most? Oh, you’re considering it, and the solution is yes. Together we could achieve great things. I could assist you so much. I could take you to locations that you’ve never even desired. But sooner, you’ll have to do something for me….”

This was the last paragraph found on Petrova’s computer before her mysterious death. 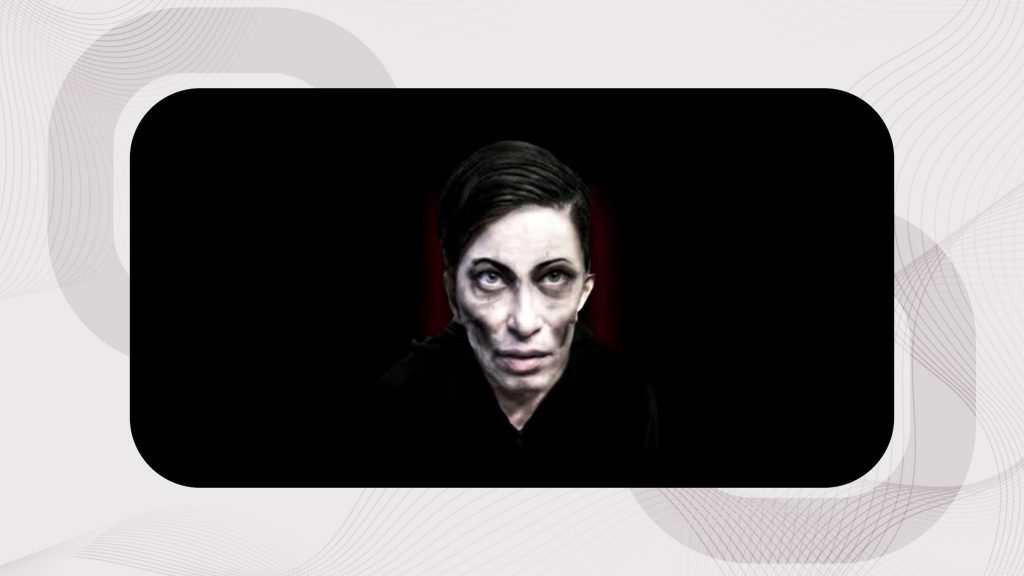 Theories Behind Her Unexplainable Death

There are multiple theories given behind her tragic demise. According to Psychologists, the story that Annora was telling is nothing but the creation of her mind. She might be suffering from a disorder that allows her to believe things that are not present in the real world.

Although, it was also believed that someone was playing with her emotions. She did not want to go down the path but was pushed deliberately into this curse. Petrova saw things because someone put all these things in front of her.

Whatever the scenario, Annora suffered throughout her life. Her tragic death was an inconceivable and completely shocking event.

Annora Petrova’s death was one of the most strange things we have ever heard or talked about. The real reason behind her death was unknown. No evidence could direct to her murder or even suicide.

Her death is a complete mystery. In fact, some people also believe it to be a narrated story that is completely baseless. The only purpose is to entertain people and create chaos.

The sports championships that have been mentioned were not found on the internet. However, we only hope this event is not true, as it was painful and gave us chills simultaneously.

Bobby O'Jay's Net Worth: Know about his Earnings and her Professional Journey

Anna Paul: How She Paved Her Way To Success?