‘The Midnight Sky’ Directed By George Clooney Review and Summary

STORY- A scientist works alone at a remote Arctic research station when he learns of a mysterious global disaster. At the same time, he meets a strange girl in the Arctic, with whom he must stop the return to Earth of the crew of the spaceship “Ether.” 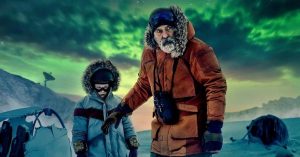 REVIEW- When writing a script, a book, or creating any story-telling medium, every scene MUST have a purpose further to develop the plot, characters, or atmosphere.

Every scene after that is meaningless to the viewer and useless to the film director. Every challenge the characters face is short-term and has nothing to do with the overall story. Only until the last 12 minutes of the movie does the story advance, albeit very little.

After sitting through the movie for an hour and a half, I debated looking for another film, but I stuck with it. If not for me, then for my readers.

Pass on this movie. It’s not science fiction, but more of a B grade movie with great sci-fi visuals. I enjoy slow-paced science fiction (Interstellar, Gravity), but this is not slow-paced. It’s no-paced.
It’s hard to know what this movie is about or what it tried to accomplish. Most of the time, you don’t know what is going on or where the story is going.

After so many great movies like Interstellar, The Martian, and others, it’s incredible to understand why movie studios won’t hire a physicist to advise them on the movie’s science portion.

Soul: A Bold Look At What Makes Life Worth Living