Elon Musk is planning to launch a vehicle prototype that could be a revolution for space travel. Starship will be a completely reusable transport system to carry about 100 people to the Red Planet.

The founding spirit of Elon Musk’s private spaceflight corporation SpaceX was to make life universal. This is partially motivated by existential risks such as a meteor collision big enough to wipe out humans.

In 2016, at an international conference, Musk outlined his rationale at a global conference, saying, “History is going to branch along with two directions. One path is we reside on Earth forever, and then there will be some eventual extinction event.”

“The other option is to become a multi-planet species and a spacefaring civilization, and I believe you would agree it is the right way to go.”

Musk has frequently spoken about his dream of building cities on Mars. He believes that civilizations would need thousands of people to become self-sustaining.

Making this dream a reality requires a vehicle that’s up to the task. A starship is a spacecraft and rocket combination that could carry more than 100 people at a time to Mars. 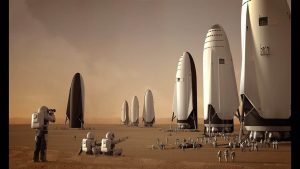 The spacecraft part of the system is called Starship, and the rocket part is called Super Heavy.

With its landing and nosecone fins, the stainless-steel vehicle bears a resemblance to the rocket-ships from the golden age of sci-fi.

Towards the middle of the craft is the explosive tanks. These transfer liquid oxygen (O2) and liquid methane (CH4) to six Raptor engines at the vehicle’s back.

Oxygen acts as an oxidizer, and methane is the fuel- a chemical that makes the fuel burn.

SpaceX has spent more than ten years developing the highly efficient Raptor engine. Because the reaction takes place in stages, and the engine’s design cuts the amount of fuel that’s wasted.

This 15 Minute HIIT Workout will get you toned