So this is what the scene looks like when traveling on Mars.

The Ingenuity helicopter took its first color image from 5.2 meters above the Martian surface while its second flight on April 22. And now, it’s planning for a third flight, scheduled for Saturday.

Ingenuity independently flew for almost 52 seconds during its next flight, climbing 4.9 meters up through the Martian environment. It tilted at a 5-degree angle after a slight hover and moved sideways for 2.1 meters.

The helicopter hung in place again to make three turns. This allowed Ingenuity’s color camera to take pictures looking in different directions before the chopper moved back down in the center of the airfield. Ingenuity only managed black-and-white images with its navigation camera during the first flight on April 19. 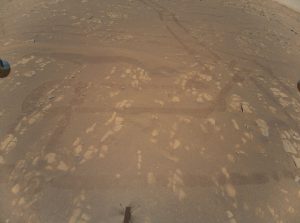 The color pictures, shared on Friday by NASA, are the first captured by an aerial vehicle while overhead on Mars. On each side of the image, landings pads from two of the helicopter’s four limbs can be noticed.

The helicopter’s shadow on the crust of Mars can be seen at the base of the image.

The scene from the helicopter’s perspective unveils tracks made by the Perseverance rover when it initially had installed the aircraft in the middle of its 10-meter-by-10-meter airfield, now called Wright Brothers Field.

There is also a sight of the Martian horizon in the upper- left and right corners.

The helicopter team considers this image helps describe the unique aerial scouting capability of Ingenuity and other rotorcraft built after it in the future.

Ingenuity isn’t losing any time, and the four-pound helicopter is scheduled to fly again on Sunday morning. Imagery and data will start streaming into the command room in California, at NASA’s Jet Propulsion Laboratory in Pasadena, at 10:16 a.m. ET.

Each effort is a little more challenging than the next. For Sunday’s flight, the helicopter will rise to the same height — about 5 meters above the Martian surface –, but this time it will boost its speed.

Here's what you need to know about cocktail smoking

According to new studies, 'belly fat' increases the risk for diseases