Kevin was substituted in the 60th minute by Gabriel Jesus after he collided with Antonio Rudiger.

“I feel good now. Still disappointed about yesterday naturally, but we will be back,” he tweeted. 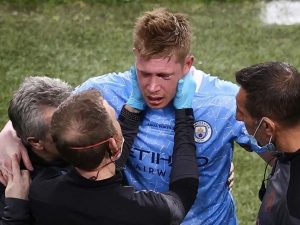 Kevin was also named in the Belgium squad for Euro 2020, with his team’s first game on June 12 against Russia.

There are no signs yet whether the midfielder will be fit for the game in St Petersburg or if his wounds threaten his participation in the rest of the tournament.

Chelsea won the final in Porto against Manchester City thanks to Kai Havertz’s 42nd-minute goal.

Kevin De Bruyne wrote on his Twitter, “Hi guys, just got back from the hospital. My diagnosis is Acute nose bone fracture and left orbital fracture. I feel okay now. Still disappointed about yesterday’s game, but we will be back.”

The remaining 2021 Indian Premier League (IPL) season will resume in the United Arab Emirates from September to October. The...