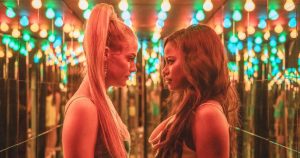 Zola is the only movie to use the credit “based on the tweets by.” The tweets in focus- all 148 of them- were posted one day in October 2015 by A’Ziah “Zola” King. They told the beautiful story of how a waitress in Detroit, ‘King’, agreed to go on a road trip with a woman she had just met. Initially, the plan was that they would make a fortune by pole dancing, but King was exploited, deceived, and endangered instead. The movie, directed by Janicza Bravo, stars Taylour Paige as Zola and Riley Keough as Stefanie, her new acquaintance. It’s “an extremely frank and funny account of one wild weekend”, says Hannah Strong. She added, “approaching sex trafficking in a completely new way as well as exploring the racial tension between Stefanie and Zola.”

Releasing on 30 June in Canada and the US.

In 2008, 27 hours after giving birth to their daughter Madeleine, Matthew Logelin’s wife Liz died suddenly. Matthew chronicled the trauma on his blog and then in a novel, Two Kisses For Maddy: A Memoir of Love and Loss. Now the book has been translated into Fatherhood, a comedy about the challenges of being a single parent and a widower. For a while, the film was considering to star Channing Tatum, but the part of Matt eventually went to Kevin Hart. It’s a captivating departure for an actor who specialises in high-volume, broad comedy. Still, the co-writer and director, Paul Weitz, is on familiar ground, having dealt with parenthood in Being Flynn and About A Boy. Interesting fact: Fatherhood is “presented by” Michelle and Barack Obama’s production company, Higher Ground.

It will be releasing on Netflix on 18 June.

Martha’s Vineyard has upped its presidential pedigree. According to reports, former President Barack Obama and Michelle Obama have purchased a...