The defending NBA champion Los Angeles Lakers were considered the favourite to win their second straight title. But how did that change when LeBron James sustained a high right ankle sprain in Saturday’s game against the Atlanta Hawks?

James could miss up to a month. Will that cause the Lakers to be players at the trade deadline? And what will the ripple effect be for other would-be title contenders?

We take a look at those questions and more with a panel of NBA experts. USA Today’s Matt Eppers moderated a roundtable with USA Today basketball writers Jeff Zillgitt and Mark Medina, J. Michael Falgoust of the Indianapolis Star, Jim Owczarski Milwaukee Journal Sentinel and Duane Rankin of the Arizona Republic.

In the East, the Bucks are not looking that far ahead that specifically. The stated goal from training camp is to win a championship, and Jrue Holiday doubled down on that with the Tucker trade. Tucker said he felt it could happen, which is why he eyed the Bucks as a potential landing spot. But for a team that has not reached the Finals since 1974, they aren’t looking at who could be on the other bench in that round — it’s about getting there. 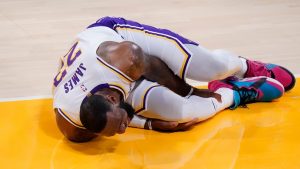 Matt, Lakers coach Frank Vogel conceded that LeBron’s injury would impact how the Lakers look at the trade deadline and buyout market. It already has. The Lakers declined to keep Damian Jones past his second 10-day contract. He’s a marginal player. But the Lakers did that, so they have an extra roster spot for any potential moves. That being said, I don’t think the Lakers will make a deal as they value the continuity and upside that Kyle Kuzma, Alex Caruso and Talen Horton-Tucker provide (and those are the guys that their most tradeable assets).

The Lakers’ movement will still be in the buyout market. Because of LeBron and Anthony Davis’ injury, it’s about adding to their frontcourt first and improving their 3-point shooting personnel second.