Taylor Swift is giving her fans the first glimpse into the vault.
Fresh off her Grammy album of the year winner and just before when she releases the first previously unheard song, “You All Over Me (From The Vault),” from her re-recorded “Fearless” album Friday at midnight, Swift shared a clip of the slow, country-rooted song with “Good Morning America” Thursday.

“God knows, too long and wasted time / lost tears, swore that I’d get out of here /, but no amount of freedom gets you clean / I’ve still got you all over me,” she sings.

“You All Over Me (From The Vault)” features background vocals from country singer Maren Morris, who has previously joined Swift performing on tour. The song was produced by her “Folklore” and “Evermore” collaborator, Aaron Dessner of The National, and co-written by Scooter Carusoe, who has also worked with Rascall Flatts and Lady A. 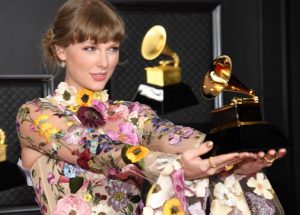 “One thing I’ve loved about these From The Vault songs is that they’ve never been heard, so I can experiment, play, and even include some of my favourite artists,” Swift wrote Wednesday on Instagram. “Can’t wait for you to hear it.”

Following a public battle with music exec Scooter Braun, whose purchase of her masters Swift previously said was her “worst-case scenario,” she announced last month the release of a re-recorded version of her second studio album “Fearless,” is due April 9.

“Fearless: Taylor’s Version” will feature 26 songs, including six fans who haven’t heard before. The first song from the newly-recorded album, “Love Story,” dropped on February 12.

“I’ve now finished re-recording all of ‘Fearless,’ which will be coming out soon,” Swift said last month on “GMA.”