by Manansh Sharma
in Sports
0 0

According to various media reports that identify him based on videos and photos taken that day, Klete Keller, an Olympic gold medalist swimmer, may have joined the U.S. Capitol riot last week.

Keller, 38, is a four-time Olympic swimmer. He earned five medals overall, including gold medals in the 2008 and 2004 Summer Games for Team USA.

Keller could not be reached on phone numbers listed for him, and a message left at his work went unanswered.
He was listed as a real estate agent with Hoff & Leigh in Colorado up until Tuesday. Hoff & Leigh issued a report on Tuesday evening saying Klete, an independent contractor, had resigned. 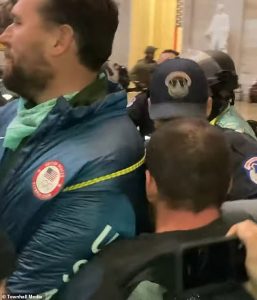 While the firm did not verify Keller was at the riot, it said: “Our company supports the right of lawful protest and free speech but we cannot deliberately ignore actions that violate the rule of law.”

Swimswam, a website about professional swimming, first reported that Keller was among the Capitol rioters, according to “former coaches and teammates” who identified him in photos.

The New York Times said Keller was in the Capitol crowd. Basing the claim on “at least a two dozen people” who had reviewed videos and images from the raid.

The publisher of Swimming World, Brent Rutemiller, also told The Arizona Republic about Keller. He said that images and photos on Keller’s social media inside the Capitol during the riot were precise depictions of the Olympic champion who trained at Phoenix Swim Club.

Brent said in an email, “That is Klete I have confirmed”. He did not explain why he was confident of Klee’s identity.

Rutemiller, the International Swimming Hall of Fame’s chief executive, said he recognized the USA Team jacket that Klete was wearing.