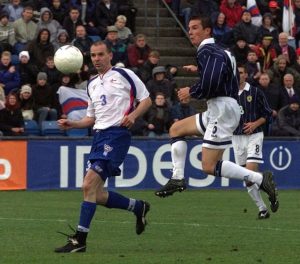 “It’s important to win in the context of the World Cup qualifying group,” Clarke added. “We have plenty more games to play after these three, and a lot can change.

“The Faroes frightened Austria. I think they’ll come at us, same as they did to Austria. They put many balls in the box, and they have a long throw and good delivery on set-plays.

“They’re a good team, not the Faroes of 10, 20, 30 years ago when they first broke into the international scene. They’re well organised and know what they’re doing.”

In the 1999 fixture under Craig Brown, Scotland took a first-half lead through Allan Johnston but then had Matt Elliott sent off just before the interval. Hans Hansen scored for the Faroes with a header late in the game to earn a 1-1 draw.

In 2002, Berti Vogts was in charge as the Scots went 2-0 down after 12 minutes to the part-timers in Toftir. Some strong words at half-time and goals in the second half from Paul Lambert and Barry Ferguson brought the score to 2-2.

However, Scotland is unbeaten against the Faroes in nine previous meetings and are 59 places above them in the world rankings.