‘Shaun The Sheep’ an animal that photosynthesis

Much like its herbivorous namesake, the ocean-dwelling "leaf sheep" grazes for food; however, it supplements its diet in a unique way: through the power of the sun.

“Shaun the Sheep” is what many divers in the Philippines affectionately call a curious sea creature known as the leaf sheep (Costasiella kuroshimae) due to its similarity to the animated lamb. Contrary to what its name suggests, the leaf sheep is neither leaf nor sheep – it’s a sea slug.

“They’re delicate creatures, and their bodies are like shell-less snails,” said Genevieve Reyes, a diver and photographer. “Leaf sheep don’t hide or retract when they feel your presence. They have a routine life, circling the leaf of algae and grazing about in their little world.” 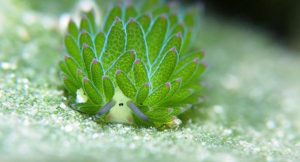 This marine invertebrate has black beady eyes situated close together, rhinophores with black tips resembling sheep’s ears or insect antennae sticking out of its white head and dotted green cerata popping out of the upper surface of its body. The sea slug’s cerata are leaflike appendages akin to an aloe vera plant or a zebra succulent. Still, typically with pink, purple or white tips, they contain branches of the digestive gland. Meanwhile, rhinophores pick up chemical signals in the water, giving the sea slug its sense of smell and enabling it to find food sources.

“People are captivated by the leaf sheep because it has a cute face and an interesting shape,” said Terrence Gosliner, senior curator of invertebrate zoology and geology at the California Academy of Sciences and a sea slug expert who has focused most of his research on the myriad species found in the Philippines. “They’re just great little slugs.”

And little they are, growing to a maximum length of seven or eight millimetres upon adulthood and living between six months and a year. According to Gosliner, leaf sheep are hermaphrodites (having male and female reproductive organs) and must mate with another individual to produce an egg mass. “The eggs hatch into shelled larvae that spend a week or two in the plankton. Then, they discard their shells and begin their life as a small slug,” he said.

How are they trying to free the Suez Canal ?